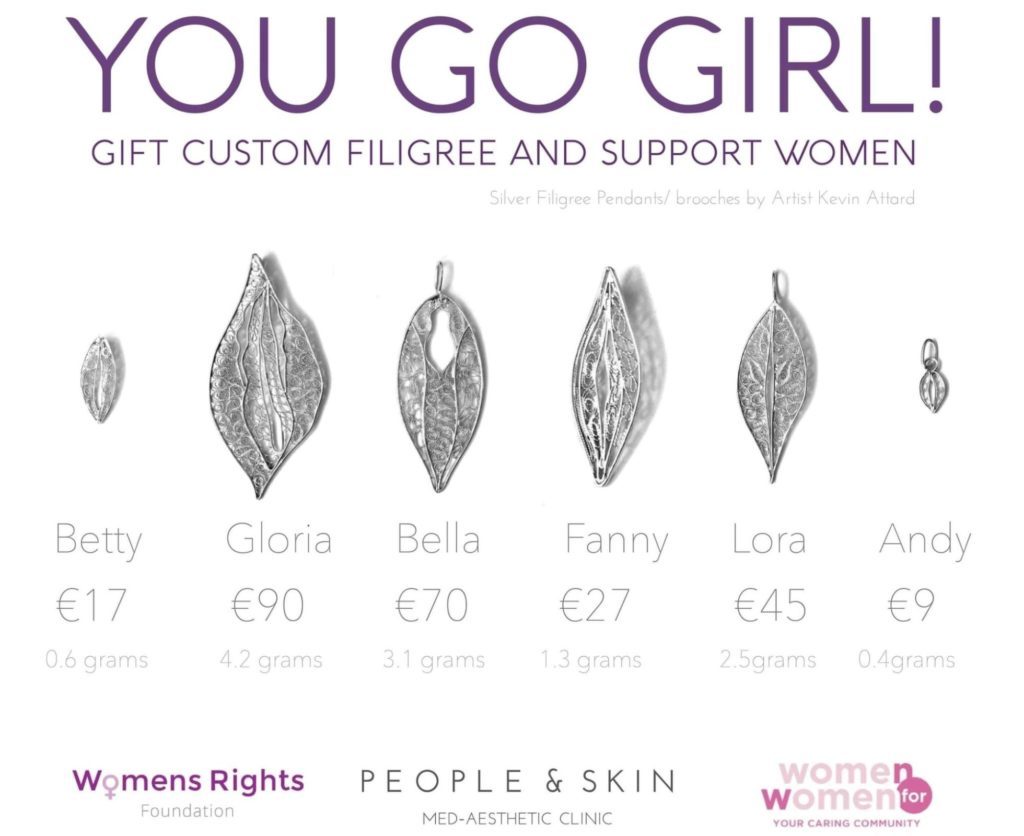 Posted at 22:25h in Blog by Claire Galea

I have always loved filigree and when Dr. Joanna Delia approached me about collaborating and selling filigree jewellery in aid of Women for Women Foundation and Women’s Rights Foundation I was immediately drawn to the idea. Any excuse to collaborate with Joanna or other like-minded women and raise funds.

I was even more excited when she told me the new pendants would be representing women’s vaginas. I affectionately nicknamed them Pussy Pendants;  while Joanna calls them Weewees.

These Weewees or Pussy Pendants are designed, and hand crafted by filigree master and iron man Kevin Attard. Kevin has been crafting amazing hand made pieces for over 33 years. I recently met up with Kevin and Joanna in Valletta and we just couldn’t stop talking, organising and planning ways in which to revive the filigree industry and at the same time help women through selling the pendants and other fundraising projects.

I had never met Kevin, but he is a gentle giant, a talented, kind, artistic man and apparently also an accomplished sportsman. I told Kevin about my love for filigree and how as a young girl it always impressed me that only men and not women were the ones working these beautiful delicate filigree pieces. Kevin explained that as a craft it was always traditionally handed down from father to son as it was men who were the breadwinners and who worked, and women were not taught trades or crafts. Kevin, however, was not taught filigree by his father but by a friend of his father at the age of 16.

According to Kevin anyone with patience, a steady hand and a creative eye can work with and create filigree pieces and he believes that women are more suited to the craft.

Kevin regularly holds filigree workshops and in a couple of hours can teach his private students to create a simple pendant. Joanna and I are now off on a role – “wow great so we can also sell vouchers and Christmas presents for your workshops too” enthuses Joanna,  “yes sure and 50% of the price will go towards your women’s organisations” Kevin generously tells us! I’m excited and have already booked a workshop session for myself and my husband (he too has always been interested in the art of filigree).

For those of you who might not have heard of or know what filigree is as its sadly a dying art form; filigree consists of intricately twisting fine silver wire or threads into detailed pieces of jewellery or statement decorative pieces. Filigree originated between the 6th and 3rd century BC and was introduced to the island by the Phoenicians. Real filigree can only be made by hand consisting of a series of tiny small parts that are then joined together to create the final piece.

My favourite pussy pendant has already been ordered and should be ready first week of December.

If you too want to book your very own limited edition pendant or want to buy one as a gift for a friend please send an email to info@wham.com.mt. Pendants will be sold at People and Skin in Sliema, vouchers for workshops can also be bought at 45 euro for a one hour private tuition session with pendant.