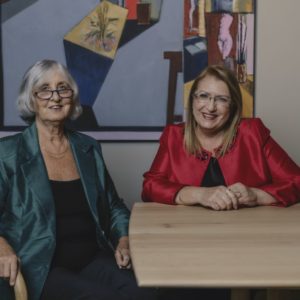 Claudia Taylor-East is the CEO of SOS Malta, a NGO established in 1991. She has been engaged in promoting volunteering in Malta and overseas in her managing roles in the third sector. Was executive chairman of the Malta Hospice Movement spearheading the development of Palliative Care services in Malta.

She has led various voluntary missions to Albania, Kosovo, Sri Lanka, Nepal and Uganda offering humanitarian assistance during emergency phase contributing to the enhancement of Malta’s reputation in the field of international solidarity. Her personal commitment to extensive community and philanthropic activities contributes and creates all kinds of partnerships that underlie a truly civil society.  Master of Letters Honoris Causa conferred by the University of Malta in November 2018.

Former President Marie Louise Coleiro Preca served in politics for 45 years and was a Member of Parliament for 16 years.  She was the very first elected female General Secretary of one of the two main political parties in Malta.  Coleiro Preca also served at the Council of Europe.  As Minister for the Family and Social Solidarity, she initiated numerous social reforms. The Maltese Parliament unanimously elected Ms Coleiro Preca as President of Malta in 2014.

Marie-Louise Coleiro Preca is deeply passionate and vociferous about improving the lives of the most vulnerable in society, continuing to be so throughout Her Presidency, and beyond. She is a strong advocate and avid speaker on a number of social issues including social justice, equality and equity, children’s rights and gender equality.