In a League of her Own 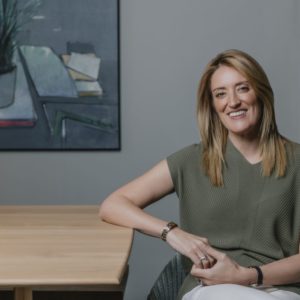 Roberta Metsola was elected President of the European Parliament in January 2022.

Professionally she is a lawyer who has specialised in European law and politics.

Prior to her election as a MEP, President Metsola served within the Permanent Representation of Malta to the European Union and later as the legal advisor to the High Representative of the European Union for Foreign Affairs and Security Policy. In her student years, she campaigned actively for Malta’s EU membership, and was active in various organisations, acting as the Secretary-General for the European Democrat Student organisation between 2002-2003.

She completed an Erasmus exchange in France and graduated from the University of Malta and the College of Europe in Bruges.

Born in 1979, Roberta Metsola is married to Ukko Metsola and is the mother of four boys.